I was riding in the car with my parents and we were stuck in traffic.  It was on I-4 East Bound right at Downtown Orlando.  I started smiling.  The sun was out, the clouds were just right, and the cars didn’t bother me one bit.  The radio is playing and I get a flashback of me being in that hospital bed not far from where we’re at and not all that long ago with the fear of not knowing.  Tears fill my eyes.  I don’t want to forget.  I can’t forget.  I’m still smiling.  I’m happy to be stuck in traffic.  Happy that I made it out of that hospital bed.  Grateful to still have my life.  Excited to be in the car with both of my parents on the way bicycle shopping for my upcoming birthday which is on 3/13/16. One may ask, how old are you turning Michele?  12?  Yes, I lived to see yet another birthday.  For that I am forever grateful. 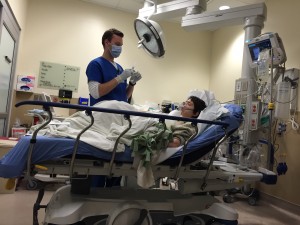 One of my many hospital beds. 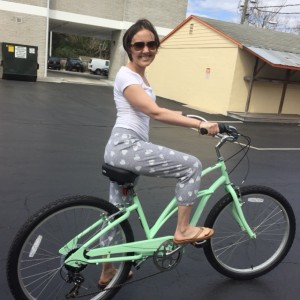 My first time on a bike in over 2 years!! Thanks for my Birthday Bike Mom and Dad 🙂

Perspective.  Something I am sad to say I don’t think I had too much of before leukemia presented itself. However, there is a weight that we cancer fighter’s carry every day.  Will I relapse?  The five year mark is a big milestone and it gets better with each passing day but it’s hard.  This is why I’m doing my best to try and live in the moment.  We shouldn’t forget someone who’s been touched by cancer, never take them for granted.  Love them more dearly and let the sweet times taste more sweet than ever before.

There are many hard aspects that go along with a long-term chronic illness.  I’ve 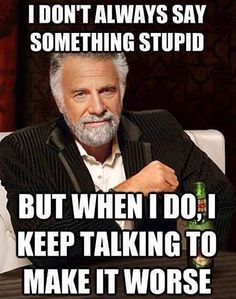 now written 40+ posts talking about my journey throughout this process and it hasn’t included nearly the amount of craziness that has happened!  Some of the most frustrating moments unfortunately involve people.  When someone gets sick, the majority of us don’t know what to do, what to say and/or how to act.  That’s how it is.  We’re out of our element.  Unless it’s happened to you before; that’s the truth, so mistakes happen.  That’s another reason why I’ve been writing; hoping that some of my words stick 😉

Some of my least favorite sayings; 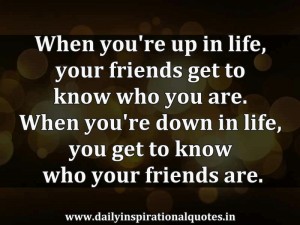 now they can’t talk about their troubles when you’re sick but there are those few that just don’t quite get it.  They’ll go as far as to not only talk about all of their troubles, but relate themselves and sometimes even get upset if you fall short on your end.  Oh yes, I am speaking with experience.  You learn a lot about people you wish you never knew.  Just like there are so many people there for you in the beginning but not many have that lasting power. In the end, you look around and see the ones who truly love you…it’s a beautiful thing and you will never forget.

This One Time In High School

One time in high school my best friend and I did the most horrifying thing.  I still have nightmares to this day.  My friends and I had a tight knit group and we’re still best friends to this day.  One of my good friends had just been in a car wreck and we didn’t have many details but we wanted to get to the hospital as soon as we could.  On the way we stopped and got a balloon and ‘lovely’ card.  We’re actually laughing as we’re picking out the card.  We get there…it’s not good.  I believe I can actually feel myself turn white as a ghost and the two of us are squeezing each other’s hands.  We try to act normal in front of our friend and her family.  Quickly realizing the card is completely inappropriate, we try and hide it.  We hand over the balloon and are crossing our fingers but the mom had seen the card go behind my back.  I was making up stupid excuses like, “Oh, we’ll give this to her later.  and This is silly, no one wants to hear this now.”  But she made me hand it over.  It was a goldfish kind of struggling to swim in its bowl and then you open the card and it says, “At least you’re not floating on the top!”  Get Well Soon!! 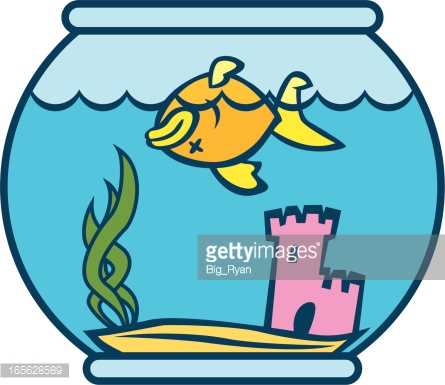 What the Hell was that?!  As you can guess, my best friend and I were terrified as they were looking it over.  Turns out, it was not funny nor was it a wise decision.  I’m certainly getting payback for my one huge mistake since I’m now having to put up with people’s foot in mouth antics.  Most of the time, they don’t even know it.  I just want to educate people.  Can I hold a ‘How You Should Talk to Sick People Symposium?’  ‘How to Act Around People with Cancer Q&A?’  I feel I could write a book alone on the things people say that are completely wrong and offensive.  Please stand by on my upcoming seminars.

“Spirit is Willing but The Flesh is Weak”

Just the other day in the bike store, the overly excited salesman who favored a bald Bilbo was trying to figure out what type of bike I was looking for.  Obviously I’m not looking for anything too complicated or that can go fast.  Just an easy ride.  He was trying to sell me one with all these features and I started explaining how I hadn’t bicycled in over two years and he was flabbergasted.  I quickly said it was due to an illness without going into details because not everyone everywhere needs to know my business but he immediately said ‘it’s mind over matter’ along with other annoying positive things that don’t “matter” when cancer is at the wheel.  Sometimes I wonder if people hear themselves speak.  Needless to say, my birthday bike was not purchased from it’s just ‘mind over matter’ douche bag.

The Cards You Want To Buy!! 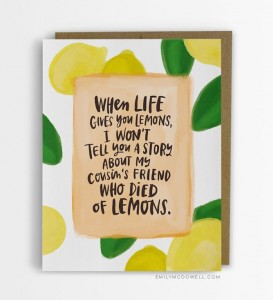 Have a family member or friend that’s fighting cancer and you don’t know how to cheer them up or don’t know what kind of card to send to them?  Look no further.  This is genius and I absolutely love the idea!  These cards are designed by a cancer survivor who recounts that the most difficult part was the loneliness and isolation she felt when many of her friends and family members disappeared because they didn’t know what to say, or said the absolute wrong thing without realizing it.  She designed these emotionally direct greeting cards that say the things she wanted to hear when she was ill.  Hands down, they are the best Cancer Empathy Cards I’ve seen thus far! 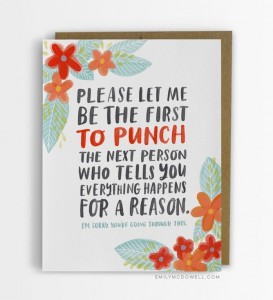 For more information, to see more cards, and to purchase:  http://emilymcdowell.com/collections/empathy-cards

Until next time, remember; it’s nice to be important but it’s more important to be nice.  Much Love!