With Valentine’s Day right around the corner, I’m no different than any other woman with good taste.  I’ve been impatiently waiting for the blood and gore that is sure to come in the premier of The Walking Dead on 2/14. 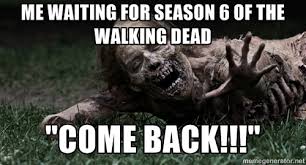 How many dates are going to be ending watching this show on this night?!  I absolutely love TWD.  I’ll go as far as saying it’s my favorite TV show I’ve ever watched.  As a girl growing up, I’ve never scared easily or gotten grossed out.  I actually seek out the unusual and grotesque.  Probably a big reason as to why makeup artistry/special effects came so natural to me.  I love horror flicks.  While everyone else is covering their eyes, including the dates I would be on, I was always wide eyed and either making a gross face or laughing.  My friends sometimes worry about me.

Aside from the obvious reasons of why one would love the Walking Dead; the characters you come to know and fall in love with, the amazing effects and zombies, and the story line.  For me, it goes beyond that.  I was diagnosed during season 4 and began to truly relate to the meaning of survival.  No…I was not running from zombies on a daily 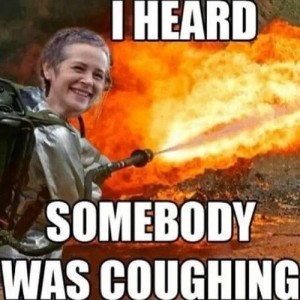 basis nor was I killing people to stay alive (although I’ve come into contact with plenty of people that have made me question if I should pull a Carol on them).  However, I was having to tell myself everyday that “I can do this” when I could barely move, when I didn’t look like myself, when I couldn’t breathe on my own and needed oxygen, when I was suffering through countless painful biopsies and spinal taps, everyday when I didn’t know if this would be the day.

Survivor.  That word is used so much for those who beat cancer and should not be taken lightly.  That’s what I was doing on a daily basis.  Surviving.  But what do we call those who fight so valiantly and lose their battle?  What is their name?  While survivor is good and fine, I prefer warrior.  Going back to my love for TWD, it’s so interesting to watch the characters evolve.  You see what they have to do, who they have to become in order to survive in the new world they live in.  They evolve or they die.  This I understand.  When you’re faced with death, it teaches you a lot about yourself you can’t possibly know until you’re there.  It’s not something you can truly share with someone.  It’s not something you can put into words with someone who’s never walked in your shoes.  A person who’s never been there will never understand.  That’s the truth of it.  Each person has their own journey to walk. 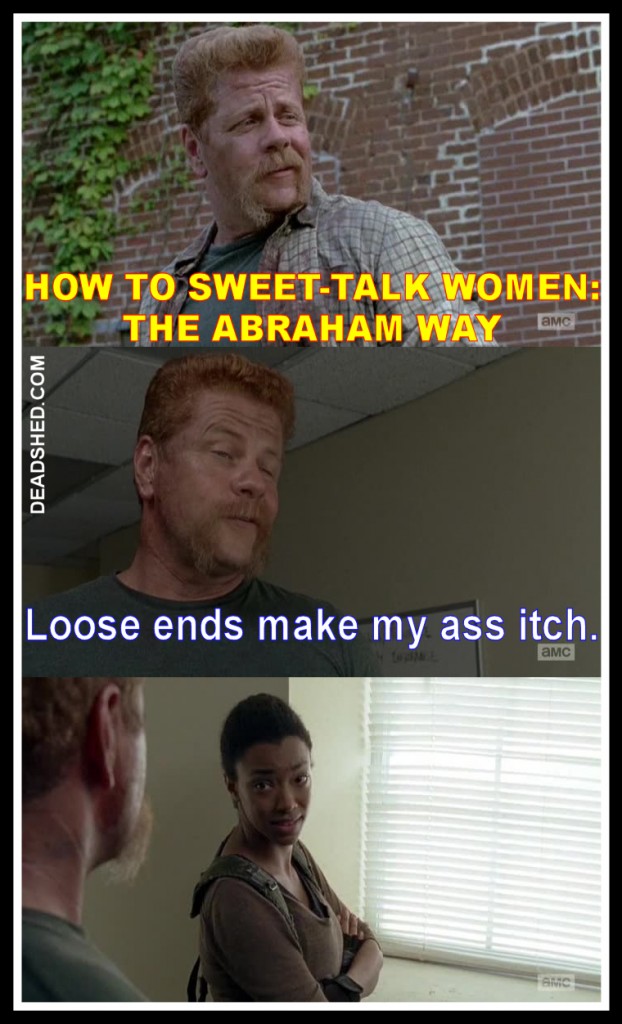 Whether I was in the hospital or at home recovering, I had plenty of time in front of the boob tube.  Watching  TWD, I began to feel the characters were almost like family.  If there was a character I could relate most with, I would say that would be Maggie.  She loved her family very much and is loyal with all of her heart.  Tenacious and never gives up no matter how grim the situation looks.  She remains hopeful when it looks like all hope is lost.
Like I’ve mentioned in previous posts, I’m not a pessimist – I’m a diehard realist.  (After the last two years, for me to not be in a deep state of depression and be a huge pessimist is incredibly impress 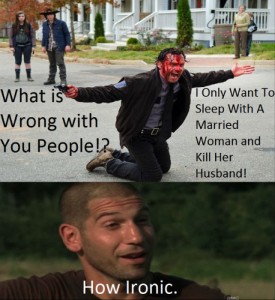 ive so get off my nuts if you think I should be doing better.)  I don’t know about you but overly optimistic people get on my nerves.  Let their lives get interrupted just a little bit by crisis or tragedy and we’ll see how their tune changes.  It’s not so easy to spout out that optimistic crap for everyone to hear when your life is in the shitter.  Anyway, back to me not being pessimistic.  Got a little sidetracked there.  I’m not a pessimist, I’m still hopeful for good things.  Most of all…happiness. 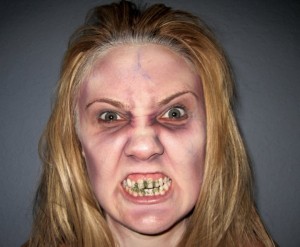 Makeup done by Michele on Michele.

The Michele that walked into the ER back in January of 2014 is not the Michele that is here today typing in this blog. Much like Rick in TWD, I had to evolve to stay alive.  I had to do it in a very short amount of time.  I had a good life.  I was happy.  I had done everything right.  I heard the word cancer.  It was bad.  I had to be ok with dying young.  I died.  I was reborn.  I am a realist.  I live in the present.  I do not waste precious time worrying about the future.  My body is still having the kinks worked out from the transplant.  I can never bear children now which makes me completely angry and heartbroken at the same time.  I’m no longer a girl.  I may have been physically strong before but I am mentally strong now.  I have a voice.  I am a beautiful woman with scars both on the inside and out.  This tragedy has opened my eyes to see things clearer and to see life for what it is, how I want to live it, and who I want to be.  The old Michele has transformed into someone I’m still getting to know, however I must say I feel more “real” than I’ve ever felt. 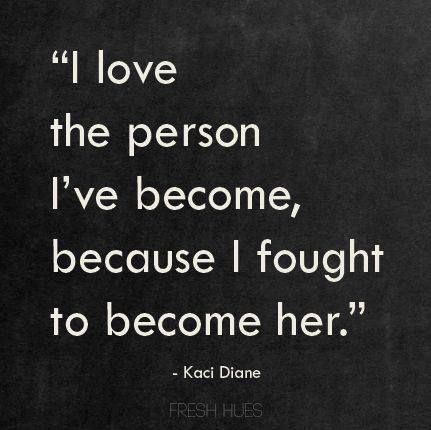 I once saw a bumper 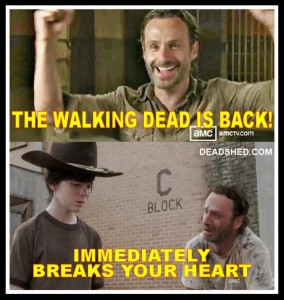 sticker that said “The hardest part about a zombie apocalypse, will be pretending I’m not excited.”  I laughed pretty hard at that!  I have to agree.  I know that’s terrible.  We have a bit of a population problem/stupid people problem.  Think about it…it would take care of both of those issues.  However, it would obviously be bad for a lot of other reasons.  It would be detrimental to my health right now considering I wouldn’t be able to get very far with my energy levels.  So if one is going to happen, fingers crossed it waits a few more years.

Hope everyone has a lovely and memorable Valentine’s Day doing whatever makes you happiest.  I will be spending it with some of the people I love the most in this world watching the much awaited Season 6 second half premier of The Walking Dead!  Bring it on but please don’t kill anyone I love… 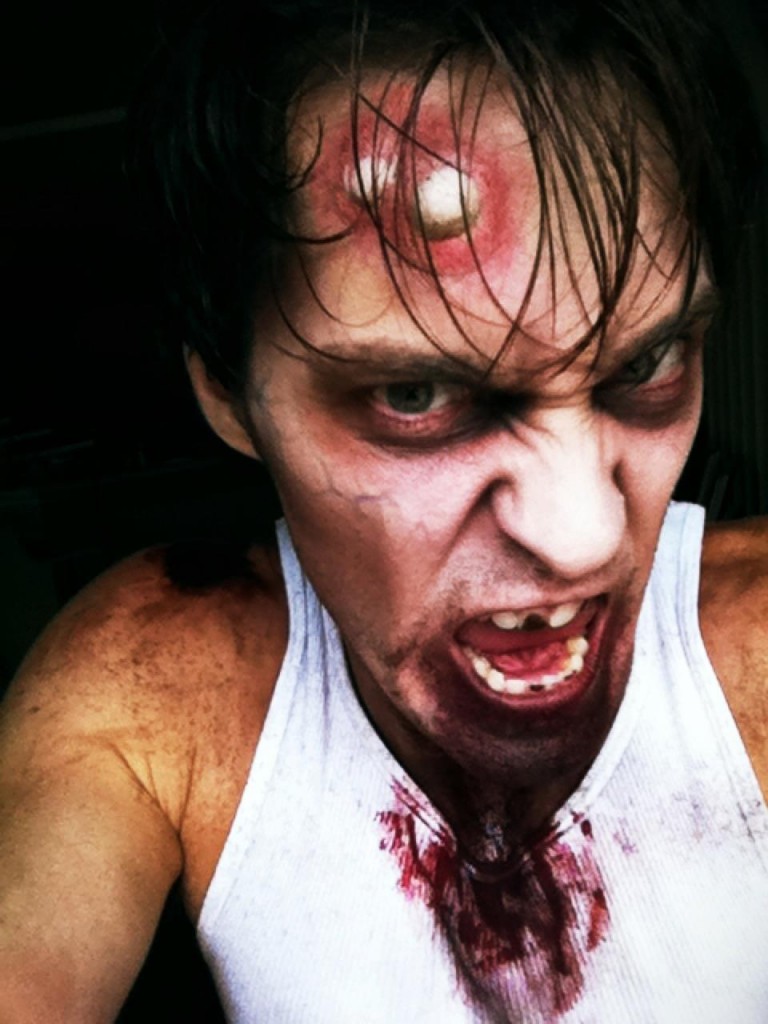