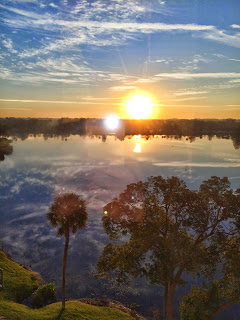 My eyes slowly open.  I’m in a hospital bed.

My husband asleep uncomfortably in the recliner to the right of me.

I still have my long blond hair.  All my pain is so raw, so wrong, so ugly.  I struggle out of bed surrounded by attached and tangled wires. I wheel my IV pole over to the window that overlooks a lake.  The sun is rising.

I stand here for a few minutes.  This photo is exactly the view from my window.

Tears start falling down my face.  I have never seen anything more beautiful.

My parents walk in at this moment.  I try to hide my sadness.  Dad is oblivious.  Mom looks at me and just knows every thought in my head instantly.  I don’t know what’s more special; finally seeing life in all its beauty or sharing that moment with one you love.

This happened last year and it’s not the only time I’ve been lost in a dimension full of sadness, melancholy, and awe.

Who you gonna call?  A therapist

I guess with so many brushes with death in recent memory, moments like the above should be expected.  They haunt me.  I try to simply breathe and embrace my plight much like a ghost whisperer (not to be confused with a Ghostbuster) would do.  But like the little boy in The Sixth Sense, I’m scared and just want to hide. 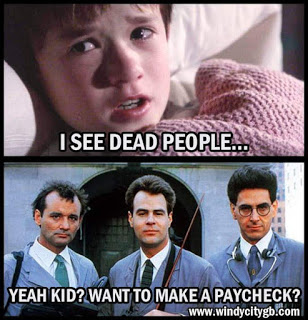 Post-traumatic stress disorder is a mental health condition that’s triggered by a terrifying event that’s either experienced or witnessed.  It all happened so fast, I didn’t have time to think.  I had to fight for my life.  Now I’m faced with everything through flashbacks, nightmares, and thoughts that just won’t stop repeating.  I’ve learned to compensate with blunt truth, sarcastic comments and an inner monologue filled with comedy and a touch of cynicism.

And so, this beautiful mess that I have created in my noggin I will entrust into the hands of a well-trained therapist in the new year.  I need all the help I can get.

Another moment hit me very recently when I had to shave my mother’s head.  You’ll remember when the news was broken in Eye of the Storm about her recent diagnosis of breast cancer.  She was told by her oncologist that the aggressive chemo would most likely make her hair fall out.  Even seeing her daughter go through it, she was still nervous.

All the signs were there.  Thinning hair.  Finding hair everywhere.  Coming out in clumps.  The more it came out, the more she pulled on it.  Your head becomes sensitive and the hair falling out the way it does makes it hurt.

I started having PTSD flashbacks. This scene was all too familiar.  My most read blog post to this day with almost 3,000 views is Bye Bye Hair which is about…well, I think you can figure that one out.  I know she had been dreading it.  I certainly was.  It engulfs your mind.  Knowing it has to be done but putting it off as long as you can. 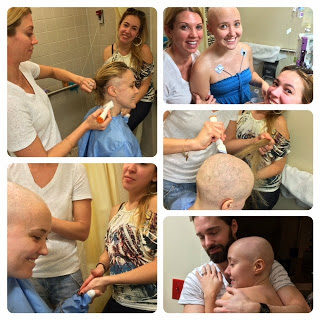 The day was here.  We set up shop in the bathroom.  I was getting ready to shave my mom’s head.  Really?!  It hasn’t even been two years since having mine shaved from cancer.  This is unreal.  I know what she’s feeling which makes it all that much worse.  Being on both sides of this coin is something that never even crossed my mind of happening in my lifetime.  If we’re being honest, being on one side didn’t pop up.  Does anyone really sit around and say, “Man, when I get cancer it’s really going to suck when I lose all my hair.”

It went about as to be expected.  I was horrified.  I believe more so than when I was having my own head shaved.  I was choking back tears.  My hands were shaking…while holding an electric razor. A million thoughts going through my head with this one being the main one – “Pull your shit together Michele.”  My mom?  Quiet.  Most likely terrified but was keeping it together like always. 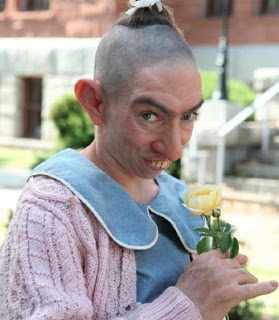 After about an hour, we realized that we did not have the proper tools.  I’m still in recovery mode.  I’m slow and don’t have much energy.  On top of that, I’m a perfectionist.  All of that is a recipe for the longest shave EVER!

There is one thing that keeps this ship from sinking.  That is laughter.

If you watch American Horror Story, mom feels like she resembles the pinhead now.  She’s always been a bit sensitive about her ears.  I think she’s beautiful no matter what, but I was terribly tempted to leave a sprig of hair in the middle of her head and stick a pretty little bow on it!

After several sessions, trying different tools, lots of laughs after the initial sadness; we’re a solid 85% of the way there.

All in all, it was four hours give or take of torture broken up by jokes and laughter.

In the end, it’s so much more than just losing your hair.  Look past the superficial.  Cancer takes so much already.  It’s degrading, it tears you down, it hurts you where you never expect it.  There are no rules, cancer fights dirty.  For a woman, our hair is the thing that makes us feel the most feminine, and now it takes that too.  Cancer is the cruelest enemy and killer I know. 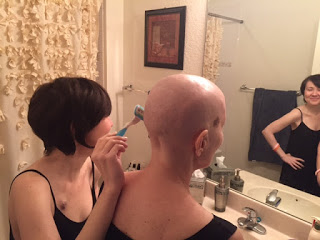 But no matter how much I’ve lost, I still remember smiling in some of the darkest moments…touched by those who love me and touching those who stood by my side the best I can.  (Lots of touching going on here.)

Even through all the sadness, the anger, the fear, there is still beauty in life and the moments we experience.  The sun rising over a lake at the hospital. Shared laughter surrounded by hair on the floor. A knowing look across years. Those moments make this bloody fight worth it.