To all my readers, I am thankful for each and every one of you.  Whenever I have a visitor over, friend, acquaintances, and even strangers tell me what an inspiration the blog has been; I am filled with joy and feel that I’m heading down the right path.  You are what keeps me happy and what keeps this blog thriving.  I am blessed.

Now, I know I’ve been doing segments of the reality of cancer starting with CANCER…The Brutal Truth.  Then followed by the most previous blog which got everyone caught up to when I went back into the hospital for my second round of chemo on March 4, 2014.  I’ve decided to not make people want to slit their wrists while reading my blogs which is why I’m going to break up the segments with some lighter material.  It will be similar to that of The Life of a Gremlin and other Short Stories.

Would you like to go on a date with me?

I’ll first start with a very romantic dinner at the lovely restaurant, Hillstone…with my mother.  You heard me right.  It was the night of my actual 5 year wedding anniversary but my husband decided to get the flu.  How rude of him.  At first, I was thinking (and all you women know what I’m saying) “stop being a baby, you’re not that sick and don’t have the flu.”  Turns out he did and was incredibly sick.  Selfishly, I was so disappointed.  I had been looking forward to this day for so long.  I was feeling good and all I wanted to do was get dressed up nice, put on some makeup, and fix up my hair (what little exists).  Just to feel normal and to be able to go out is a very big deal to me right now.  Remember, it’s the little things.

Well…I decided to take out my leading lady.  We went to Hillstone in Winter Park.  What a beautiful restaurant and the service is impeccable.  We had the perfect table to watch the sunset.  I started with a hot tea.  The dinner was perfect which included ribs and a burger.  We topped it off with more tea and a cappuccino for my date.  And then the icing on the cake…their special apple cobbler.  We had a fabulous time and I couldn’t have asked for better conversation or a better date.  Scott…snooze you lose.

Who Picks on a CANCER patient?!


Even though we’re at Day 222 after the transplant, more than half way to the year mark, there are still many doctor’s appointments we have to go to.  Good days, they are few and far in between.  Bad days, it sometimes feels like I have at least two or more every week.  There’s this one appointment that happens once a month, CHE IVIG, which is an immune booster.  (I’m not sure why it’s called that because it does not feel like it boosts anything.  It’s an IV that puts fluids in me and can take up to 4 hours.  It makes me feel like crap for the next week.)  Thanks for the good feel booster!

I arrive at my appointment right on time and wait in the lobby.  My mom had gone to the restroom so it was just me and my dad who was two chairs down.  I had noticed two ladies at the other end of the lobby, one clearly a cancer patient and the other one I could only assume was a friend or family member.  It was a cold day, so I had just removed my stocking cap and was fluffing up my hair.  I overheard the one lady start talking about short hair.  And reassuring her friend how hers was going to grow back.  These were her next words, “You don’t want to do short, spiky hair though.  That is so out.  I think it went out like mid 90’s.  It doesn’t even look good.”
She said this with such disdain in her voice.  I couldn’t believe my ears.  It was 7am and to make sure I wasn’t going crazy, I looked down there at these ladies that were having a conversation clearly about me and clearly doing so loud enough for me to hear.  I looked at the “non-cancer” woman.  She was just staring at me harshly.  I thought lazer beams were going to come out of her eyes and kill me.  Next, I get out my McDonalds biscuit since we had to leave the house so early. Oh no, I did it again.  Something to offend this woman that I do not know.  I heard the hopingly nice cancer lady say, “Oh, that’s smart to bring in breakfast while waiting.”  The other woman, who resembled a devil that walks amongst us, says, “In all the months I’ve come here, I’ve never seen anyone do that.  So rude.”

My mother comes back from the restroom and I just crack up laughing.  She wants to know why.  I can’t stop laughing.  I thank God that I was taken quickly that day.  That I decided to not stoop to the level of the frizzy haired scary lady who had such contempt for me for unexplainable reasons.  I certainly told my mom the whole story the second we got into my room.  By the way, crazy lady, short hair is very much so in right now.  I should know, I’m in the beauty industry!  Here’s a few leading ladies that are rocking short pixie cuts. 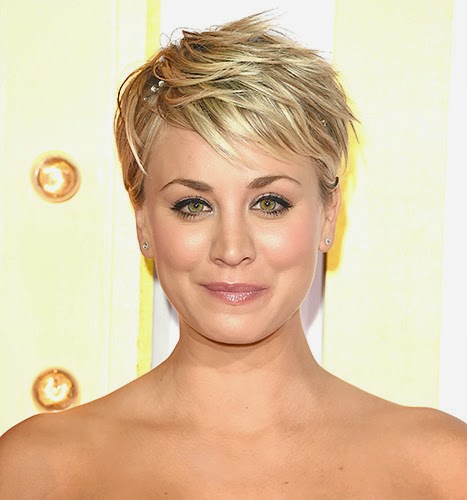 I ask, “Who does that to anyone?  But who does that to someone they don’t know that is clearly a cancer patient?”  It takes all kinds.  I believe in karma and what you put out in this world, you will receive.  Yes, it bothered me.  Should it have??  I don’t know.  I’m a woman who has emotions.  Not to mention the amount of pills I take on a daily basis which I’m sure doesn’t help with my mood swings.  I’m also going through what doctors believe is early menopause due to the chemo and radiation.  The sad part…there have been several occasions this past year of dealing with not very kind people.  Later on that day I did the whole, well I should have done this or said this, like so many of us when we’re caught off guard by terrible people or situations.  You know though, maybe that’s a good thing when you don’t have a quick come back.  Just something to think about.

I went to an  Endocrine Dr. to have some more tests ran just a few weeks ago.  Very nice and I look forward to seeing him again.  One of the problems we were discussing was the roundness of my face, or moonface, as it’s called in the cancer world.  These next few pictures are hard to reveal for the world to see, but that’s what this blog is all about.  The reality of my life.  I truly believe that we’re scared to be honest and truthful with one another.  You know what though?  Life sucks sometimes and shit happens.  Pick yourself up and keep going.

Other discussion?  The overgrowth of hair.  I’m not scurred of admitting it.  It’s awful.  I look like a freakin’ werewolf!

My face, my arms, my back, and well…we’ll just leave it at that.  Ok.  To go back to the moonface, the Dr. asked to see some before cancer pictures of myself.  I was able to pull up

whatever he needed on my trusty little iphone6.  His reaction was priceless.  “This is you?!”  Looking at the me now, looking at blonde pre-cancer Michele, looking back at me.  I showed him a few more so he could see all profiles and know that my face is double if not triple the size it should be.  Kept getting the same reaction.  I can’t say it was too much of a self-esteem booster.  But at least I know I was pretty at one time.  Just kidding!  I love my new hair.  The color.  Overall, I love the new me.

And once we get everything figured out, I’ll look like the old me, just a better version.  Please, anyone going through cancer, a disease, or just a hard time, know that if you are positive and have healthy self-esteem, you will think of yourself as beautiful because you are.  No matter what anyone says.  Everyone is beautiful in their own imperfect way.  Right now, I’ve got a bobblehead for a face and my new hair growth is manly.  I know I’m a Mann, but come on!   You know what though…I’m dealing with it.  I hope you can deal with your hangups.  I also hope this doctor, as nice as he is, is more aware of the fact that hottie blonde Michele will be no more.

You may ask, what’s still alive?  ME!  My 32nd birthday is this Friday, March 13.  Anyone that knows me knows that I love birthday time.  Over the years, my husband has noticed that birthdays have turned into birthweekends, birthweeks, and birthmonths.  He’s considered calling this time of year Birthanukkah.  Such a silly man.  Last year, I had cancer and my birthday was spent in the hospital.  But we made the best of it with the help from family and friends.  This year I am home.  Home.  I’m not going to lie…it’s been a rough few weeks health wise.  So many doctor’s appointments, I haven’t felt well most days, I now am having to take shots on a daily basis, and my best friend that was suppose to come in this weekend is now sick and can not come.  However, I can get through this.  That I know.  The best gift of all?  I’m still here.

No slitting of wrists, I hope?  With the next blog, I will continue with the reality of what my life has been since January ’14.  Until then, remember to smile.  You’re much more attractive.  It’s a proven fact!