Had my clinical visit last week and have great news. Still no leukemia in my blood which means I am in remission. However, I am still not out of the woods until the one year anniversary of my transplant which is July ’15. At that point, there is an 80% chance that I will not relapse. After the one year mark, I have to get all of my immunizations again which will span a 2 year time frame. (Yes, the ones we all get when we were babies.) This was and continues to be a rough cancer that constantly has me asking questions. I will feel the best when we reach 5 years and I will say the word, hell, I’ll shout it, REMISSION with much more confidence. 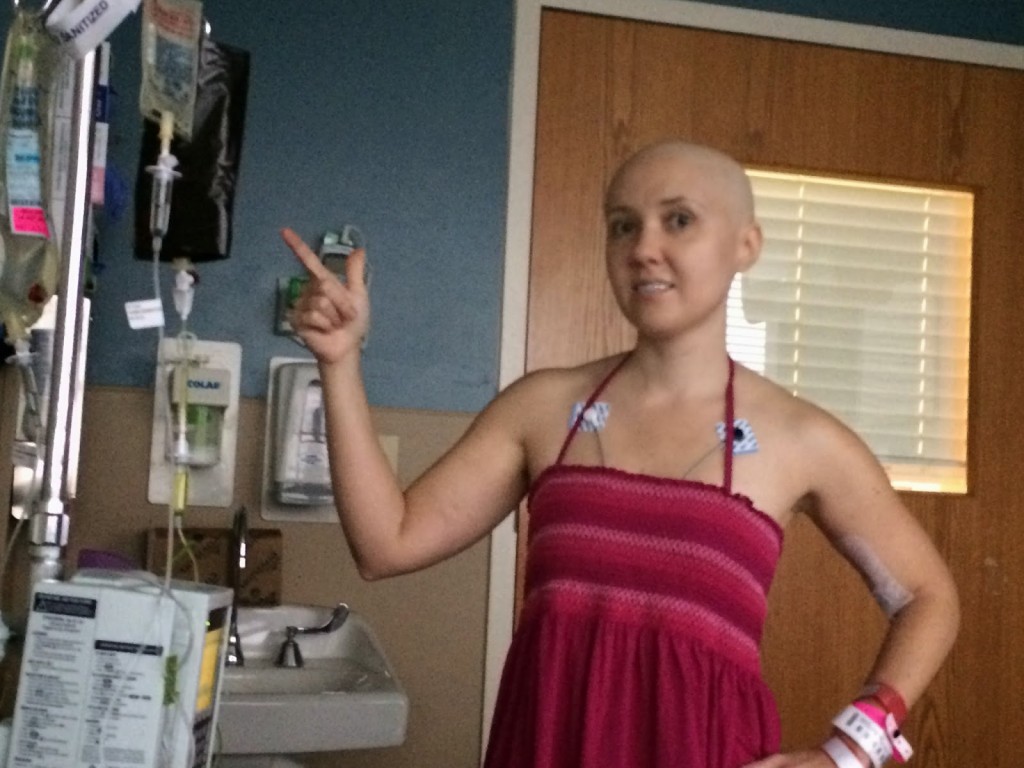 To continue with my ‘Cancer Reality Blog’, let’s pick up where we left off with the last blog of these segments. It’s March 4th, 2014 and I’ve just finished the fertility process and am now going back into the hospital for my second round of chemo. Something I haven’t really hit on is how very terrible the cancer and chemotherapy makes you feel. I remember the unrelenting pain, nausea, vomiting, retaining fluid, headaches, severe weakness, and absolutely no appetite. Just to go to the bathroom would take so much energy. And everywhere I went, “my friend” went. My friend meaning my iv pole. (Which had to be unplugged and plugged back in each time I had to go somewhere.  The amount of cords would depend on how many machines I had going). Man that was a pain constantly lugging that thing around but definitely not the worst of it. Most of my time was spent laying in the bed. Now, I’m going to take you through a typical day in the hospital for me.

The biggest obstacle on a daily basis was shower time which normally took place in the morning. Since I could barely move on my own, I had to have help every time I needed to get out of bed. This is something the nurses could have helped me with but my mother/amazing caregiver was by my side every single day. My parents would show up at about 7am and leave around 6 or later which was when either my husband, mother in law, or friends would come in to take over. I was never alone. Ok, back to my showers.

I was 30 years old and I couldn’t bathe myself. My mom had to do it all. Have the bathroom ready with all essentials, get my clothes, undress me, and put me in the shower chair to wash me down. Bet she didn’t think she would have to do that again after giving me my last bath as a little girl. Because of the cancer, medicines, and everything else I can still feel the bone chilling cold I would feel every time I would have to strip down and be in the shower. The water didn’t warm me. Showers were not enjoyable. They were just another means of pain I had to endure. I just wanted them over as quickly as possible. At least we didn’t have hair to worry about during the second chemo round…there’s an upside!

Since I was nice and clean, as long as I felt ok, this is when we would typically go for a walk on our floor. The nurses recommended a few laps at least 4 x’s a day. It was so hard for me mentally not just physically. I mean, I went from someone who worked out hard core 4-6 days a week to barely being able to walk a few laps each day as my exercise. I’ve now done my first walk of the day, back to the bed. 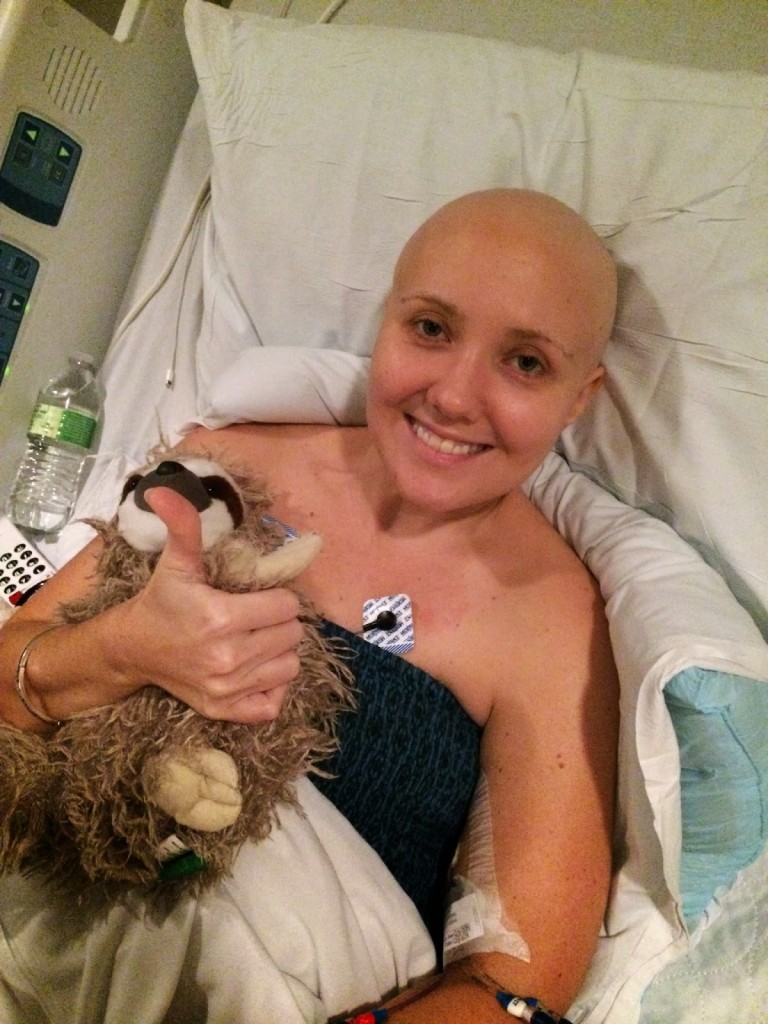 My day is filled with many pills, iv’s, chemo, constant nurse check ups, tests, bathroom breaks, visits from friends, seeing my Dr. once a day, naps, and watching movies endlessly . Though I don’t know that I ever actually made it through any one movie all the way without falling asleep.

As like most of us when tragedy happens, my defense mechanism was to block out as much as humanely possible. I still remember a lot, but I know my memory is not that of my parents and husband who saw what I had to go through day in and day out. It is weird, though, the things you do remember. For instance, one of my memories is of me being transported in a bed to another part of the hospital for a test to be run. I remember looking up in one of those big corner mirrors they have in hospitals and seeing myself. Who was that person? I had on loads of blankets because I was always so cold, pale as a ghost, and bald. I had that look of bad health where when you see that person you instantly feel for them. I hate to say it, but death is what I looked like most of the time.

Alright, so we’ve made it through the day. I would eat when I could. Drinking water was important so I did that as much as my body allowed. Some days I would go without throwing up. Those were considered decent days. Now it’s time for bed. My husband spent every night with me sleeping uncomfortably right by my side. 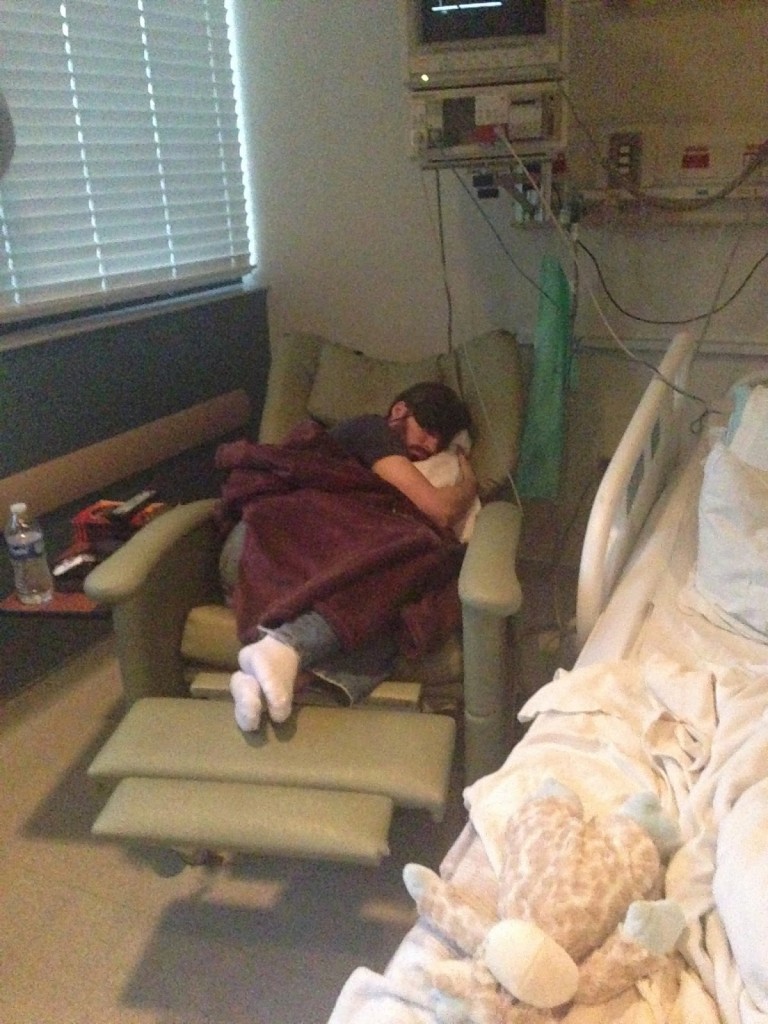 Trying to sleep as a cancer patient in a hospital is next to impossible. Some nurses were strict and completely by the book. They would come in and take my vitals every hour on the hour. Yeah, try to sleep through that. Others would let me sleep a little longer which was much appreciated. I remember some nurses that didn’t have me much would freak out because my blood pressure would be low. (Which was normal for me at the time.) So they would come in even more than once an hour. I tried ambien, had narcotics in me, ativan, you name it. Nothing really, truly worked. 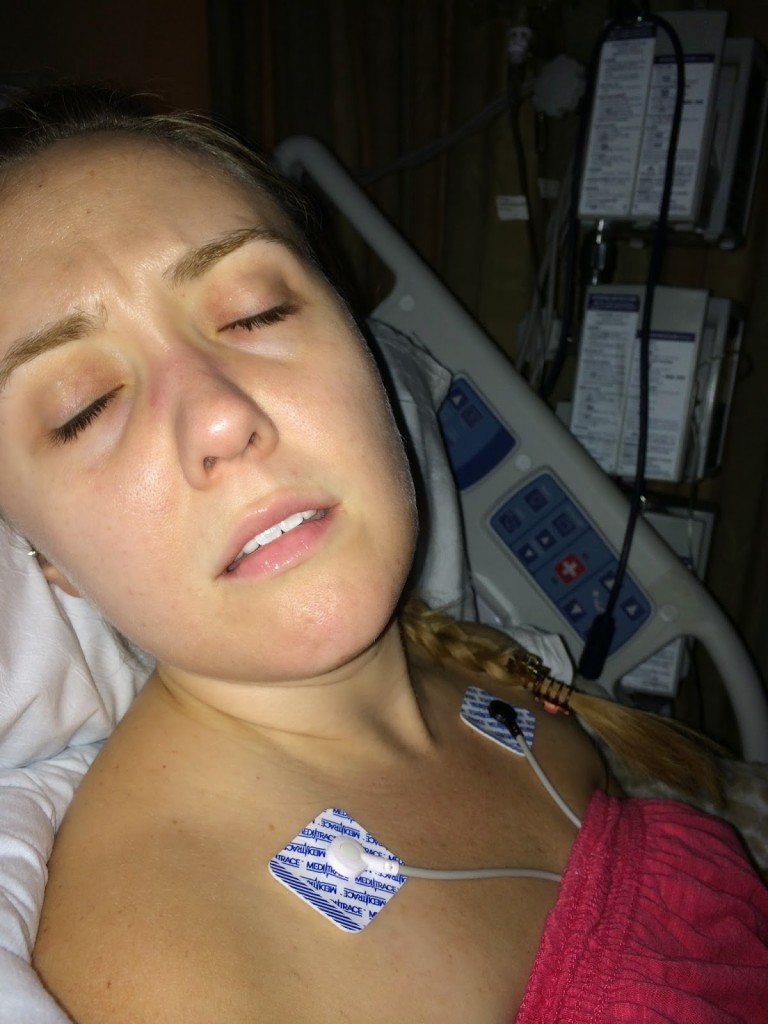 There were plenty of nights too where they would have me do tests. I’d be transported to have a ct scan done at midnight. The latest I was out of my bed for a test was 2am. Thank God naps exist. Unfortunately, this is a source of anxiety for me still to this day. I have a hard time wanting to go to bed. It’s like I’m scared of sleep now. I think maybe it also had something to do with, “if I fall asleep, will I wake up?” So when I was in the hospital looking fragile and so sickly, I want to say that every time morning came and my eyes would open, we would all breathe a sigh of relief.

Survival meant having a Transplant

I was released from the hospital after my second round of chemo on March 14, 2014. Unfortunately, I didn’t stay out of the hospital for too many days. On the 18th, I was readmitted due to a low grade fever. At least this stay wasn’t long. I was back out on the 20th. Most of my days were spent home bound because of my energy level. I did have a Pre-Transplant Bucket list, so every now and then I would get out for shopping, play dates, eating out at restaurants, and enjoying my cat before having to give her to adoptive parents during the year of my transplant. 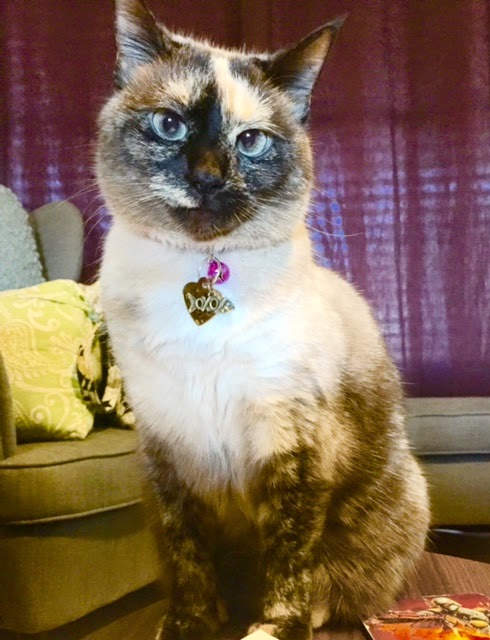 The next noteworthy news was when we were told I had no cancer in my body as of April 16, but still had to have a transplant. As mentioned throughout ‘Charmed Life, Meet Cancer‘, I had to have a transplant in order to live. However, they couldn’t even start that process until my new insurance kicked in which was May 1, 2014. So we were waiting. Just waiting.

Alrighty, let’s end on a good note, shall we? I just celebrated my 32nd birthday last week! If you read the previous blog, Shit Happens, I touched on a few things about the days leading up to my birthday. Unfortunately, I continued to feel bad and wasn’t able to truly celebrate my bday until the following week. My husband posted the sweetest thing on FB and then gave people my amazon wishlist in case anyone wanted to send a gift. Or as he put it, “help me make Michele smile.” (I swear I had nothing to do with this!)  Since we’re both huge advocates for Be The Match, he also was still educating people on the importance of becoming a member and possibly donating one day.  Even if he got just one new person to sign up, that’s something!

The amount of gifts that came pouring in from Amazon were crazy and I will never forget the generosity from people once again. I’m also thankful that I was NOT in the hospital this year at my birthday! Some improvement, right?

Like I said, the next week I celebrated and it was perfect since my moms birthday was 3/20. We went shopping on Park Ave, went to Daytona Beach, had a monte cristo sandwich at my favorite beachside restaurant, Racing’s North Turn, and had a girls day with some of my best friends. Although it wasn’t quite what had originally been planned, I’m gonna go ahead and say it turned out better. Which is how life can be at times. You can be pleasantly surprised at the way things can work themselves out. And I know…the best is yet to come! I have to believe that. I have to have Hope. We all do. If you don’t have hope, what’s the point in living? 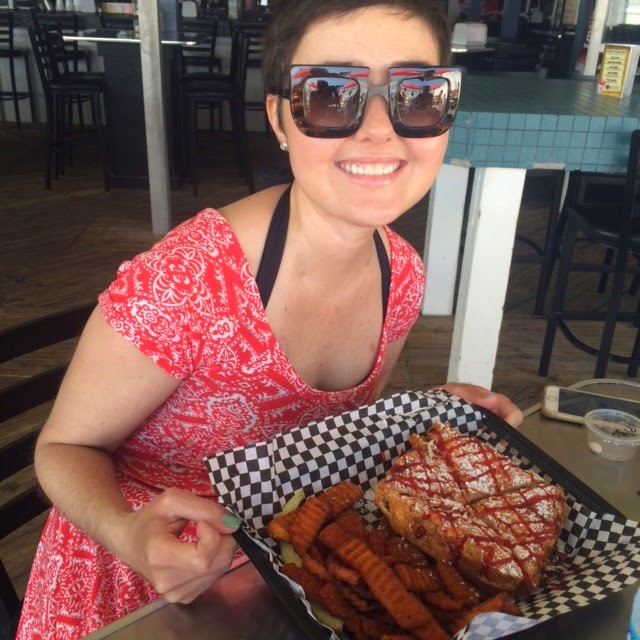 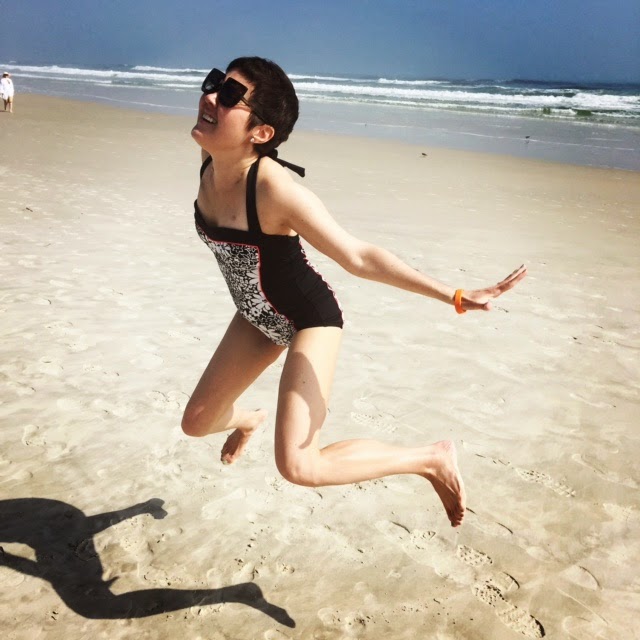 I am thankful every day when I open my eyes in the morning. To be honest, I don’t know if they’ve ever been more open. I feel so many of us are guilty of just going through the motions of our daily routines looking through rose colored glasses. We all get wrapped up in life that we tend to forget to live it. Don’t forget. Love each and every moment. And remember…Open your eyes.